Brought to you by

TELL US ABOUT THE ACTIVITIES AND IMPACT OF YOUR PROJECT

I organized an Early International Women’s Day Brunch which was held on March 1, 2020. My helpers and I arrived at the hall at 9 am to begin the set up. The event began at 10 a.m. and that is when people started to arrive at the Cosmo Senior Centre in Moose Jaw. All 50 of the free tickets were spoken for but only 42 actually ended up attending. Once the majority of people were seated, I made my opening statements and introduction at 10:30. We then enjoyed the brunch catered by Carol’s Catering. After the meal, the guest speaker Christine Boyczuk gave a wonderful speech about the importance of supporting other women and being there for one another. Her inspirational words were a great addition to the event! After her speech, there were dainties from the Maple Leaf Bakery that were served. After the dainties, a draw was made for the 15 door prizes that were generously donated by local businesses in Moose Jaw. For the people that did not receive door prizes, they were welcome to take the flowers home that were on the tables. After the door prizes, I made a short closing speech and thanked everyone for attending the Early International Women’s Day Brunch. After the event, I received many positive comments about the success of the brunch. Many people told me how important they thought it was and what a great idea this type of event was for Moose Jaw. I also spoke with a reporter and she wrote a story in our local paper about the event. The event helped to bring women from the community of Moose Jaw together to celebrate and support one another. There was a diverse range of women who attended the event. Women of all ages, backgrounds, and career paths attended the event and showed their support. I was very grateful that so many women felt the desire to be a part of this event.

In order to recruit peers to help plan my event I first looked to the people around me. My sister Sophia offered to create the poster for the event, as well as the programs that were displayed on each table. My boyfriend Joey also helped me organize the brunch and he helped a lot with the set up and the take down of the event. In order to recruit more of my peers I went to social media. In an Instagram story I asked if anyone would be interested in helping. Four of my peers, two that I had known from high school and two from university offered to help. They helped to spread awareness about the brunch to get more people interested and they also helped me approach local businesses for door prize donations. These four peers did not want to be featured in the newspaper article but I made sure to acknowledge their contributions on the day of the event. Had it not been for my peers, and the support of my family, the Early International Women’s Day Brunch would not have been possible.

WHO DID YOUR PROJECT ENGAGE AND WHAT IMPACTS DID YOU AND YOUR TEAM ACHIEVE?

My target audience was women and girls from all backgrounds. I wanted my event to be accessible to everyone and to include women and girls from all walks of life. I had many people come up to me after the event and tell me that they loved the diversity of the event and the different ages that were represented. I think my team was able to achieve an event that was inclusive a brought together 42 women to support and celebrate one another.

TELL US ABOUT YOUR BIGGEST SUCCESS ACHIEVED THROUGH YOUR PROJECT

There were some bumps along the way that I would change for next time. One of my biggest challenges was getting a hold of the coordinator from the organization – Girl Guides of Canada. She had agreed for me to do this project for the girls in November, but it was hard to get responses from her. I didn’t hear conformation from her until January. Many of the details were delayed and I learned a lot for next time. It was hard for me to find a balance of being nice but also getting answers. When I do this again, I will be clearer of what I am doing and what I need from the get go.

TELL US ABOUT THE LESSONS LEARNED THROUGH YOUR PROJECT

I think my biggest success was bringing together women and girls from all over the community. Women and girls who attended were able to enjoy a free brunch, an encouraging message from Christine Boyczuk, and door prizes donated by local businesses. The event achieved its purpose, which was to celebrate and support the women of Moose Jaw. 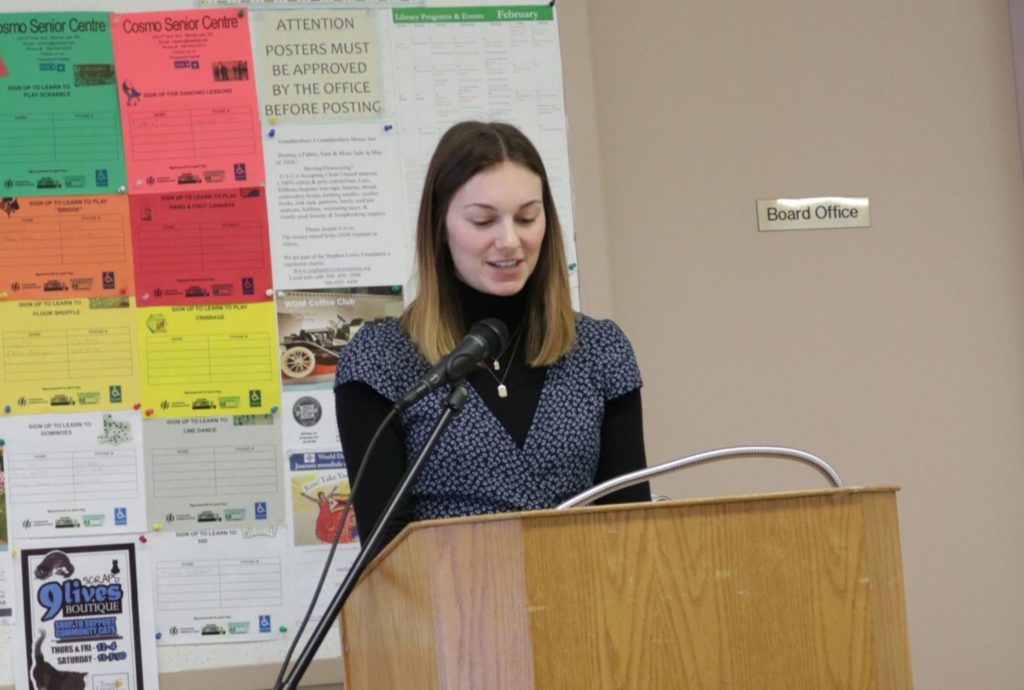 Isabella Grajczyk welcomes the women in her community!​